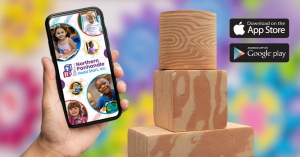 Each year, Head Start staff (and parents) nominate a fellow staff member to be considered as the Rhonda L. Moore Memorial Award recipient.  The first award was presented in May 1998.

Rhonda L. Moore became a Head Start parent for the second time at our New Martinsville, WV Center when her son was enrolled in September of 1995. Immediately she volunteered in the classroom and as a bus aide. Her involvement in Head Start made her eager to become an employee and work on a regular basis, so she applied for a position as a Special Needs Aide.  In February of 1996, Rhonda was hired for this position and began her employment with Northern Panhandle Head Start, Inc.

While working as a Special Needs Aide, Rhonda was encouraged by Shirley Kiggans, the New Martinsville Bus Driver to consider obtaining her CDL to be a bus driver. During the spring of 1996 Shirley became ill and was unable to work. Bus drivers from other centers and central office staff with current CDL’s substituted as drivers for the New Martinsville Center. Rhonda saw the need for a driver and decided she would become one. So, on her own, she studied and took the Commercial Drivers License test. After passing the written part of the test, Jack Miller the bus driver from our Simpson Center (at that time) and Tammy Swiger the bus driver from Jacksonburg trained her on the road. In fact, Rhonda was so eager, determined and excited to be a bus driver she tore the clutch out of Tammy’s bus while they were practicing on the road. In August of 1996 Rhonda passed her road test and was offered the bus driver position at the New Martinsville Center.  She held this position until she passed away on April 19, 1997.

The children at the center loved having Rhonda as their bus driver and their friend in the classroom. Our staff that worked with Rhonda remembers her as an excellent team member who was always upbeat, happy, positive and reliable. Rhonda L. Moore did whatever she could to add to the lives of those around her.

Since 1998, staff and parents have nominated a past or present Head Start parent that has been employed by NPHS Inc. for at least one full year as of the January before the award is presented (typically the end of May during the Staff Celebration).  The nominee must exhibit the following attributes:

Nominations are reviewed by a committee comprised of one current Head Start/Early Head Start parent, the previous year's award recipient and the fiscal assistant.  The family and community partnerships manager facilitates the process.